The Canadian economy is slowing, but inflation is still too high to prevent another aggressive interest rate hike from the Bank of Canada. We expect a 50 basis point increase next week to bring the overnight rate to 3.75%. This is less than the 75 basis point rise in September and the 100 basis point jump in July. But it’s still bigger than “normal”. And the risks remain that the central bank could expand: the markets are currently leaning towards a rise of 75 basis points.

Economic growth slowed during the summer. And we expect next week’s August GDP report to be little changed from July (in line with early estimates from Statistics Canada). This slowdown likely extended into the fall, as hours worked in September fell 0.6%. The Bank of Canada’s Q3 Business Outlook Survey also signaled weakening business confidence. Labor markets remain incredibly tight, with job vacancies outstripping available unemployed. But inflation is unlikely to return fully and sustainably to the central bank’s 2-3% target range until the economy slows further. This keeps monetary policymakers firmly focused on rate hikes, even as the growth outlook softens.

There are some early signs that the broader measures of inflation are starting to fade. The Bank of Canada’s preferred “median” and “adjusted” CPI measures are still up 5% from a year ago, but recent month-over-month increases have been more weak. And companies’ longer-term inflation expectations have fallen slightly. But September’s headline annual inflation rate of 7% is still more than double the Bank of Canada’s inflation target range.

We continue to expect inflation and higher interest rates to push Canada into a mild recession in the first half of next year. This would put the central bank in a position to suspend interest rate hikes by the end of 2022. And indeed, we expect the overnight rate to end the year at 4%. But the risks to this assumption are still tilted to the upside and hinge on broader inflation trends showing further evidence of a slowdown. 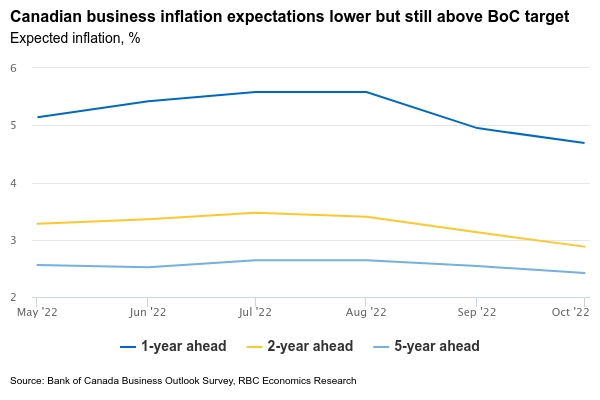 Monitoring data for the coming week:

We expect Canadian GDP to edge up 0.1% in August, matching Statistics Canada’s first estimate that output was “essentially unchanged” in the month. Manufacturing output likely fell slightly and home resales continued to decline, but retail and wholesale sales volumes rose in August.

We expect US GDP to grow 1.8% in the third quarter, boosted by an increase in net trade and modest growth in consumer spending, partially offset by weaker residential investment and declining inventories. 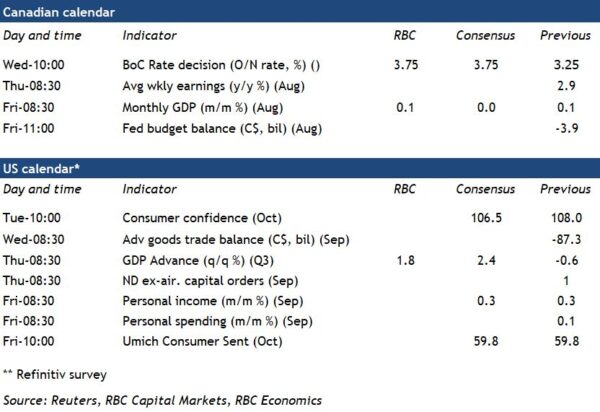 NEW DELHI: Minutes of unscheduled May 2-4 Monetary Policy Committee meeting at which rate hike was announced show much higher degree of urgency about inflation among members of the rate setting panel. Among the main factors that prompted Reserve Bank of India Governor Shaktikanta Das to announce the rate hike on May 4 was the […]

Interest rates: the Reserve Bank will continue to raise rates until 2023

Australian homeowners can expect rates to rise again when the Reserve Bank meets next month. Economists now predict rates will rise another 0.50 percentage points in October. The central bank raised its key rate by 50 basis points to 2.35% at the start of the month, the fifth hike in as many months. However, the […]

By Shaloo Shrivastava and Cynthia Kim (Reuters) – South Korea’s central bank will make its first-ever 50 basis point rate hike to 2.25% on Wednesday, mounting pressure in a rate hike campaign as inflation hits a 24-year high and has yet to peak, a Reuters poll showed on Monday. One of the first central banks […]