CLEAR advised its customers that their facilities at Terminal 4 at Los Angeles LAX airport, used by American Airlines, will be temporarily unavailable no reopening dates specified.

Customers are advised to use the CLEAR lanes in adjacent Terminal 5 and the Tom Bradley International Terminal, which of course is a laughable suggestion.

According to the email that just arrived, there will be some kind of construction in Terminal 4 that will impact the security checkpoint area and make CLEAR unavailable until further notice.

Here is the email I received a few hours ago: 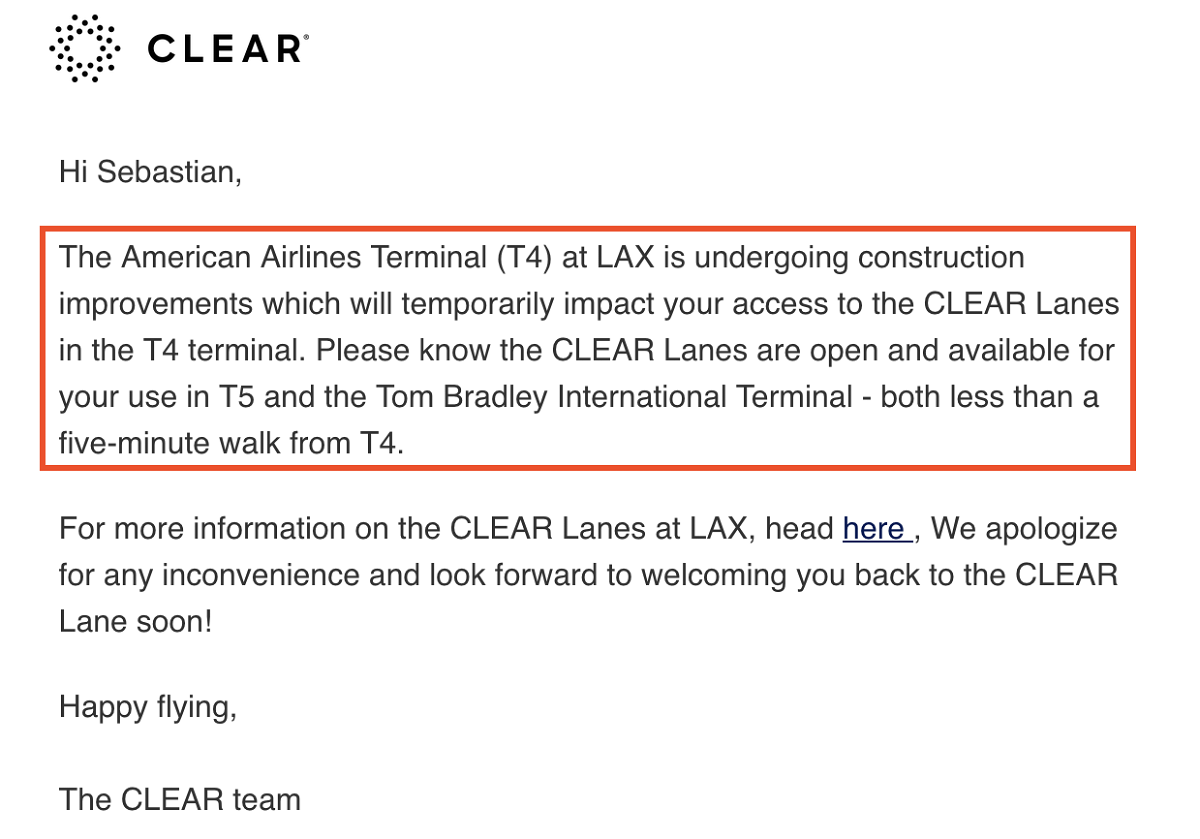 It’s hard for me to understand exactly what would impact CLEAR service, but keep the remaining security lanes intact, including PreCheck and AA Priority AAcess lines.

I won’t be in the US until April/May so I have no chance of inspecting what it is just yet, but given how messy Q4 usually is, I expect the worse.

The CLEAR lane advisory at LAX reads with respect to Terminal 4:

Please note! The American Airlines Terminal (T4) will be under construction from February 16, 2022, which will impact CLEAR Lane. Please head to T5 or the Tom Bradley International Terminal to continue enjoying your membership – both are less than a five-minute walk from T4.

I’m really curious what they’re doing there and how it affects the safety lane situation in general.

Terminal 4 has two different areas for security checks, the general area (right) for all passengers and then the priority lane (left) where there are also pre-screening and CLEAR lanes.

What kind of construction can they do there that would only be clear at these two checkpoints?

Going to Terminal 5 or TBIT just to use CLEAR for security clearance and then going back to T4 is totally out of the question, especially if you need assistance at the counter, like checking a bag. The only way it could work is for someone with hand luggage only, to be dropped off at the TBIT and then use the checkpoint there.

TBIT is generally quiet these days, but that’s no guarantee either. The American Express Centurion Lounge is also still closed, otherwise that would be a good deal.

Anyway, I hope the CLEAR facility is back up and running properly at Terminal 4. I consider this to be one of the worst terminals in LAX to get through security.

When departing from LAX with American Airlines, there is a small advantage for travelers with oneWorld Emerald status from a partner carrier, as they are eligible to use Flagship Check-in at LAX which also provides an escort to the security checkpoint, avoiding queues. Note that AA’s own Emerald customers cannot use this feature.

CLEAR has informed members that their lanes at the LAX terminal will be unavailable from February 16, 2022 until further notice subject to the completion of unspecified construction work at the terminal.

Maybe one of our readers can explain what they’re doing there at Terminal 4 and how it affects wait times in general. I have always dreaded using this terminal over the past few years.

What is an online interior design service?

Pretty much every type of service is online these days, including home decorating. Once the province of professionals who walked into your home or future home and advised you on the layout, flow and decor of the room, interior decorating has gone virtual: companies such as Decorist, Havenly and Modsy offer advice and recommendations with […]

The postal service, an excellent model for other government services

In case you missed it, because it got so little media attention, there’s some good news from the United States Postal Service (USPS). In what was a very rare moment of bipartisan unity on a domestic issue, the U.S. Senate passed the Postal Service Reform Act on March 8 with a solid 79-19 vote. The […]