Asia-Pacific-based fintech companies raised $3.33 billion in 186 deals during the first quarter of 2022, surpassing previous deal values ​​and volumes seen in the March quarter over the past three years . Digital lenders, the fintech segment the pandemic has hit hardest, appear to be back in vogue, topping all other fintech categories with $1.28 billion raised across 52 deals.

While record year-over-year funding levels in the first quarter paint a rosy picture of the fundraising environment for Asia-Pacific fintechs, a sequential comparison signals otherwise and is perhaps more revealing of what awaits us. Quarter-over-quarter, Q1 funding levels represent a 26% decline in the dollar amount raised and a 9.7% decline in the number of deals. Fintech fundraising activity may see a further downturn in later periods due to a disappointing public equity market and further rate hikes.

That said, mature fintechs, which appear to remain attractive to venture capitalists, could help offset some of the lower funding levels. Several established fintechs continue to receive new funding from new investors, and their continued penchant for inorganic growth in this uncertain climate seems to suggest confidence in their ability to raise more capital. 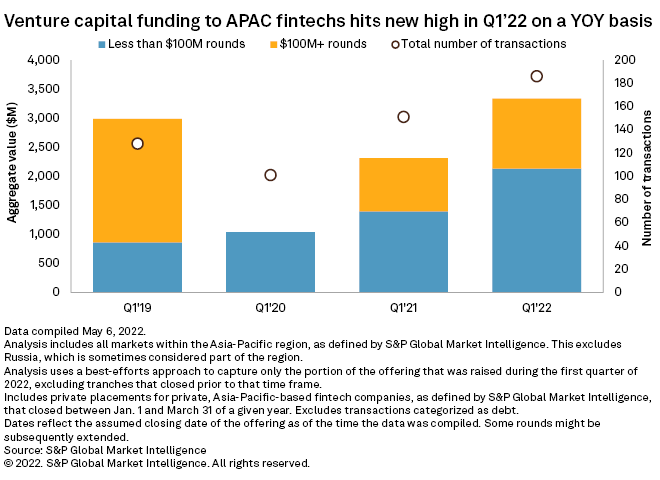 Overall, the size of checks seems to be decreasing. In the March quarter, there were eight deals worth more than $100 million, with these mega-towers contributing 36% of the total funding raised. In comparison, the previous quarter saw 11 mega-rounds which accounted for 55% of the dollar amount raised. 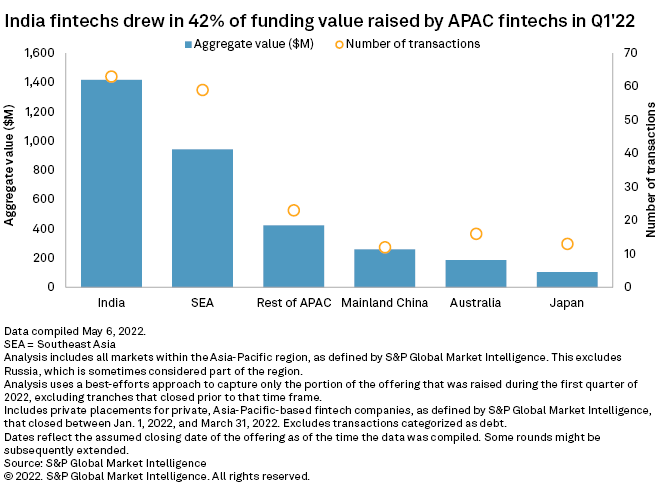 As in previous quarters, India-based fintechs continued to dominate funding in Asia-Pacific, accounting for 42% and 34% of total deal value and volume, respectively, in the region. Funding for the Indian fintech scene was largely fueled by three fintechs which raised over $100 million in the first quarter. Pin Labs Pvt. Ltd., Oxyzo Financial Services Pvt. ltd. and Credavenue Private Ltd. collectively contributed 38% of the $1.42 billion raised.

Pine Labs started out as a point-of-sale payment provider, but has expanded aggressively into the online payment space lately. It will use some of the new funding to scale Plural, its online payments brand that launched in October 2021. With plenty of new money in its coffers, Pine Labs appears to be open to inorganic growth. In February, it acquired Qfix, an India-based online payments start-up and had also taken a majority stake in Synergistic Financial Networks Pvt Ltd., another payment fintech in April. Pine Labs had previously filed for an IPO in the United States with the aim of listing in the first half of the year. But it could delay its listing until the end of the year or even early 2023 in bearish market conditions, according to Mint.

Oxyzo raised $200m in a Series A funding round at a $1bn valuation on a post financial basis. The digital lender focused on small and medium businesses spun off from OFB Tech Pvt. Ltd., or OfBusiness, a mature business-to-business platform, which partly explains the significant fundraising and valuation that is perhaps scarce for an early-stage funding round. That said, the lender’s rapid growth over the past two years has likely helped investors believe in the company. Between fiscal years 2020 and 2022 ending March, Oxyzo grew assets under management 2.8x in local currency to $350 million while maintaining a low gross non-performing assets ratio of 1.25%. By comparison, India’s regular commercial banks recorded a ratio of 6.9% in September 2021, with the central bank expecting this figure to increase to 8.1% by September 2022 in the reference scenario.

Although its affiliation with OfBusiness may have given the lender some advantage in terms of access to SMEs using the OfBusiness platform, Oxyzo claims that more than 70% of loans have been granted to companies outside OfBusiness. Oxyzo credits its success to improving appetite for loans, as well as its focus on lending to businesses with a credit history, which helps its loan recovery rate. Oxyzo and OfBusiness share a similar group of investors like Alpha Wave Global LP, Tiger Global Management LLC, NVP Associates LLC, Matrix Partners India Advisors LLP and Creation Investments Capital Management LLC. A key exception is SoftBank Group Corp., which backed OfBusiness but did not participate in Oxyzo’s recent funding round. 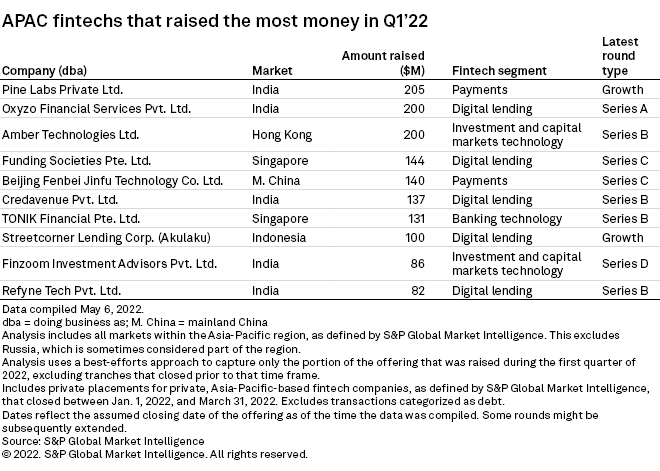 Payment fintechs had consistently led total fintech funding in previous periods, but appear to have lost some of their shine in the March quarter, ceding the top spot to digital lenders.

The digital lending sector was the hardest-hit fintech category at the height of the pandemic as investors feared new loans would be hit by a spike in defaults, especially as many of their Underwriting engines have not yet gone through a full credit cycle. But lending to fintechs that have proven their resilience in these uncertain times could have spurred the return of investor confidence.

Five of the top 10 fintechs by amount raised are digital lenders. The three most funded lenders, Oxyzo, Funding Societies Pte. ltd. and Credavenue, focus primarily on SME lending and rely heavily on third-party funding to provide credit. Streetcorner Lending Corp., or Akulaku, is a consumer finance platform that offers buy-it-now services and cash lending. In 2021, the lender doubled its loan disbursements to more than $2.2 billion while maintaining its share of 90-day non-performing loans at 6.3%, a figure below pre-pandemic levels. Refyne Tech Private Ltd. is a paid access provider that allows employees to cash their salary before their payday.

Investor optimism about digital lenders could be short-lived, however, if recession fears and a rising rate environment dampen demand for loans. 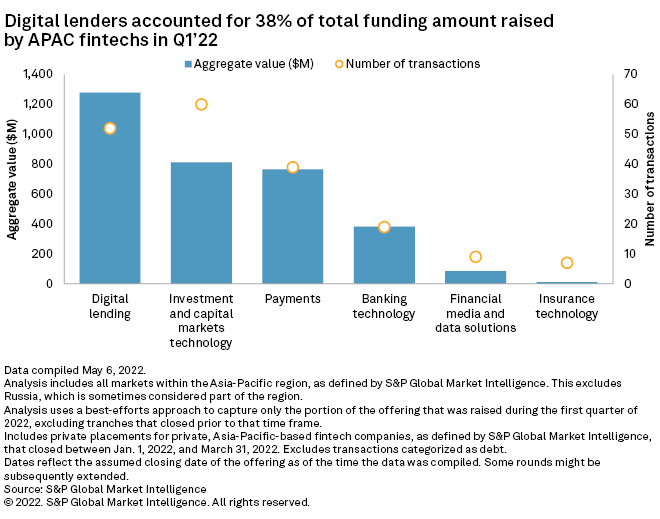 The macroeconomic headwinds like a rising rate environment and a declining stock market that we previously highlighted continue to persist and will likely weigh on funding levels in the periods ahead. Despite near-record levels of liquidity in the global system, the smaller check sizes seen in the first quarter suggest investors are more conservative and selective in their trade choices.

The recent closure of Fast AF Inc., a US-based one-click payment provider, perhaps illustrates the importance of financial discipline in this unfavorable funding climate. The Stripe Inc.-backed company, which raised more than $100 million last year, closed in April as high rates of cash burn and low revenue deterred investors from injecting more money in the business.

On a more positive note, fintechs whose listing plans were disrupted by the market rout were able to pursue their growth targets. FinAccel Pte. Ltd., for example, completed the acquisition of its $200 million majority stake in Bank Bisnis despite abandoning its speculative merger plan with VPC Impact Acquisition Holdings II. Likewise, Pine Labs continues its inorganic growth even though its IPO plans have been pushed back.

Islamabad, June 16: The Pakistani government has hiked fuel prices by up to 29%, scrapping fuel subsidies in a bid to reduce the budget deficit and secure critical IMF support for the cash-strapped economy .This is the third reduction in fuel subsidies by the government led by Prime Minister Shehbaz Sharif in about 20 days.The […]

PA projector is an independent, nonpartisan newsroom powered by The Philadelphia Inquirer in partnership with PennLive/The Patriot-News, TribLIVE/Pittsburgh Tribune-Review, and WITF Public Media. Sign up for our free newsletters. Story by Stephen Caruso of Spotlight PA HARRISBURG — Pennsylvania’s top lawmakers have reached a tentative deal to withdraw private money from election administration. The exact […]

Linktree allows users to create a simple landing page with all links presented. Photo: Linktree Linktree, known for its ‘link in bio’ tool, has raised $110m (£84m) in funding to fuel its geographic expansion as the social media startup targets the UK. The link-in-bio category creator, headquartered in Melbourne, directs followers to social media profiles, […]