Switzerland no longer has the lowest interest rates in the world. With high inflation in many countries and rapid interest rate hikes by central banks, the Swiss National Bank (SNB) raised its policy rate out of negative territory in September for the first time since January 2015. The last time the bank raised interest was in 2007.

While inflation in Switzerland stood at 3.5% in August, above the SNB’s 0%-2% target, prices are rising much more in other countries – around 9 %-10% in the euro zone, the United States and the United Kingdom.

So what are the driving forces behind the rise in interest rates in Switzerland? Will the SNB raise its rates further? In this article, we examine the outlook for Swiss interest rates.

The role of the SNB in ​​Swiss monetary policy

The Schweizerische Nationalbank (Swiss National Bank) is the central bank of Switzerland, responsible for implementing the country’s monetary policy as an independent entity. The bank’s mandate is to maintain price stability, ie a low and stable rate of inflation.

“The SNB equates price stability with an increase in consumer prices of less than 2% per year. Deflation – that is, a sustained fall in the price level – also violates the objective of price stability. A medium-term inflation forecast serves as the main indicator for monetary policy decisions,” according to the SNB website.

The SNB implements its monetary policy by setting the Swiss key interest rate as a benchmark for the country’s financial institutions, in order to keep short-term money market rates in Swiss francs (CHF) close to the key rate. The bank also intervenes in the foreign exchange market if necessary to influence monetary conditions by managing the country’s foreign currency reserves.

The SNB issues Swiss banknotes and coins and participates in the Swiss Interbank Clearing (SIC) payment system for cashless payments.

The SNB ends the era of negative rates in Europe

The SNB surprised financial markets on June 16 when it raised Swiss bank rates for the first time in 15 years, raising the key rate by 50 basis points to -0.25% and indicating that further hikes would be coming.

The SNB makes its monetary policy decisions quarterly, rather than monthly like some other central banks, so the next hike was on September 22. It raised the rate by 75 basis points to 0.5%, ending negative interest rates in Switzerland. 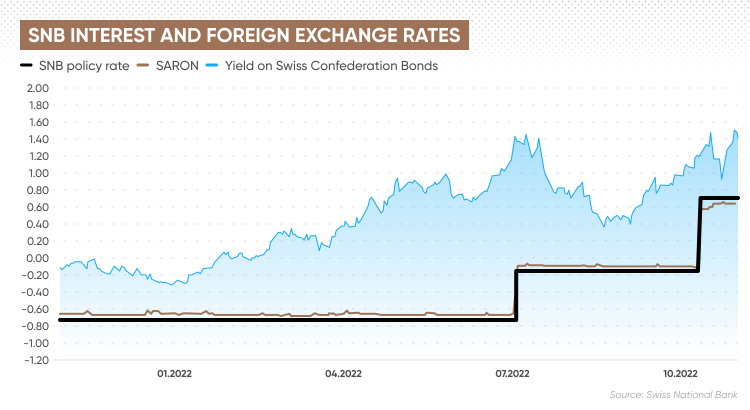 Switzerland was the last European country to have a negative interest rate, as the ECB pushed eurozone rates out of negative territory in July and raised them again on September 14 to 0.75%.

According to an analysis by the Dutch bank ING:

“Thanks to a more favorable energy mix, a lower share of energy in consumption, and the strength of the Swiss franc, which limits imported inflation, inflation in Switzerland nevertheless remains well below that of neighboring countries. The SNB considers the risk of second-round effects to be significant.”

The SNB said that by raising rates, it is “countering the further rise in inflationary pressures and the spread of inflation to goods and services that have so far been less affected.”

The bank expects inflation “to remain at a high level for the time being. The latest rise in inflation is mainly due to rising prices of goods, especially energy and food.

“It cannot be ruled out that further increases in the SNB’s key interest rate will be necessary to ensure price stability in the medium term. In order to provide appropriate monetary conditions, the SNB is also willing to be active in the foreign exchange market if necessary,” the SNB said. said.

The SNB has revised down its forecast for gross domestic product (GDP) growth to 2% for this year, down from its previous forecast of 2.5%. “The level of uncertainty associated with the forecast remains high. The biggest risks are a global economic slowdown, a worsening gas shortage in Europe and a power shortage in Switzerland. In addition, a resurgence of the coronavirus pandemic cannot be excluded.”

As part of a change in foreign exchange policy, the central bank halted its currency purchases to curb the strength of the Swiss franc, selling for 5 million Swiss francs ($4.9 million) during the second quarter, after buying 353 billion Swiss francs over the past seven years.

In 2020, the SNB bought 112 billion francs in foreign currencies to limit a strengthening of the franc, as investors used it as a safe haven due to concerns about the impact of the Covid-19 pandemic.

But the bank changed its policy, becoming less concerned about currency appreciation and more about inflation, which, although lower than in other countries, was at its highest level in 29 years in August. This is partly explained by the fact that the rise in inflation abroad reduced the impact of the strong franc on Swiss exports and limited the rise in the prices of imported products.

Given that the SNB has not ruled out future rate hikes, what is the latest outlook for Swiss interest rates? When should investors expect the next interest rate hike in Switzerland?

How do you feel about USD/CHF?

Vote to see the sentiment of traders!

ING analysts expect Swiss interest rates to rise again by the end of the year:

“Given the inflation forecast, there is little doubt that the SNB will continue to raise rates going forward,” analysts wrote after the September hike.

“Unlike other central banks, the SNB only meets quarterly, so the next meeting will be in December. By then, the European Central Bank and Federal Reserve will likely have raised rates another 75 basis points. in October and November and will raise them again in December. The SNB could follow suit, probably raising its rate by 75 basis points in December as well. This will probably be the last rate hike and we do not expect it more in 2023. Indeed, the worsening economic outlook and expected lower inflation in 2023 should be enough to leave the SNB comfortable with a rate of 1.25% for the year as a whole.”

An analysis by data provider Trade economy expected Swiss bank rates could stay at 0.50% for the rest of the year. But he forecast Swiss interest rates to rise in 2023, trending around 2% before falling back to 1% in 2024, according to his econometric models.

French bank Societe Generale expected Swiss central bank interest rates to rise another 25 basis points in December to 0.75%. The bank further predicts that the SNB may continue to raise rates in 2023, to 1% in the first quarter, 1.25% in the second quarter and 1.50% in the third quarter.

SocGen expects Swiss bank interest rates to rise further to 1.75% on average from 2024 to 2026, according to forecast data.

Note that analysts’ predictions may be wrong. Forecasts should not replace your own research.

RBI May Hike Rates in March Quarter; coal and chip shortages are a concern: Nomura

The Reserve Bank is likely to change its monetary policy stance and raise rates from the first quarter of 2022, a Japanese brokerage said on Monday. The central bank will begin this month with liquidity normalization measures, narrowing the difference between the rate at which it funds the system and the rate at which it […]

RBI to hike rates amid rising inflation, but hikes must not be endless: Governor Shaktikanta Das

WARSAW, Oct 18 (Reuters) – Poland’s central bank does not have enough room to raise interest rates amid an expected economic slowdown, central banker Cezary Kochalski said on Tuesday. Polish inflation would remain high in the coming months and in the first quarter of 2023 but would not exceed 20%, Kochalski told TVN24 television in […]