From September 17, trains in each direction will run once an hour between Saturday and Wednesday evening.

The ministry said the service will not be offered on Thursday – usually the main evening for nightlife in Israel – due to a need for maintenance at the Jerusalem end of the line, although the train will run through the night between Tel Aviv and Ben Gurion Airport, where it stops regularly.

The Jerusalem-Tel Aviv rapid train made its first trip from Navon station in the capital to Hagana station south of Tel Aviv in December 2019, with additional stops in Tel Aviv made available in the months that followed. .

The long-awaited direct rapid train began operating 18 years after the start of the project and 11 years after its originally scheduled completion date.

The new line has significantly shortened the journey between Israel’s two largest cities, although there have been criticisms of the time it takes to get from the Jerusalem station entrance to the platform.

The move could be seen as part of Transport Minister Merav Michaeli’s effort to pitch public transport as a solution to the country’s congestion crisis.

The ministry led by Michaeli has invested about 80% of its budget in public transport and sustainable transportation projects, and 20% in private vehicle infrastructure.

A new entrance to Jerusalem – Route 16 – which was inaugurated last week, is expected to significantly ease traffic flow at the capital’s main entrance, allowing a quick commute between Route 1 and the city’s southern neighborhoods.

The road, made up of four tunnels and seven bridges, also includes 50,000 acres of newly landscaped territory with bike paths, walking paths, picnic areas and vantage points overlooking the hills of Jerusalem. 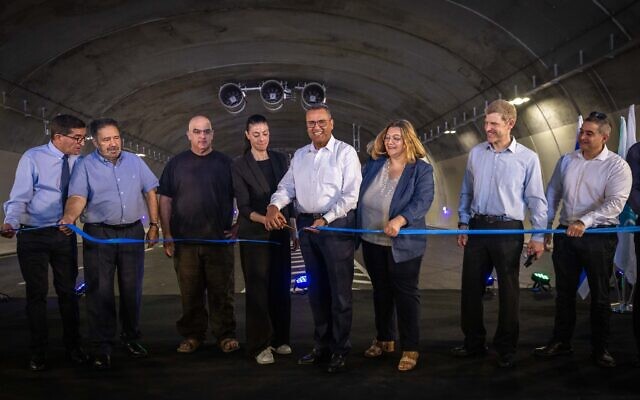 Michaeli’s initiative to promote public transport in Israel could also tackle the phenomenon of traffic accidents.

Separately on Saturday evening, a private vehicle driven by a 73-year-old woman lost control and slammed into the gate of Tel Aviv’s HaShalom train station.

No injuries were reported in the incident, but extensive damage was caused to the station, according to a report by the Kan public broadcaster.

You are a dedicated reader

We’re really glad you read X Articles from The Times of Israel over the past month.

That’s why we started The Times of Israel ten years ago – to provide discerning readers like you with must-read coverage of Israel and the Jewish world.

So now we have a request. Unlike other media, we don’t have a paywall in place. But since the journalism we do is expensive, we invite readers to whom The Times of Israel has become important to support our work by joining The Times of Israel community.

For just $6 a month, you can help support our quality journalism while benefiting from The Times of Israel WITHOUT ADVERTISINGas well as access Exclusive content only available to members of the Times of Israel community.

Thanks,
David Horovitz, founding editor of The Times of Israel

The managers of a chain of restaurants in Lytham called a guest who complained about the “appalling” service they received. The Olive Tree Brewery on Dicconson Terrace is well-loved by hundreds of past patrons. As a franchise restaurant, the restaurant is known for its Mediterranean, European and Greek cuisines served in a sophisticated setting. Previous […]

William David Neuman, 87, of Dresher, PA, died Monday, March 28. Born April 20, 1934 in Philadelphia, PA, to Harold L. and Sylvia (Haimowitz) Neuman. Billy, an early iconoclast with a quirky humour, was a speleologist, skier, diver and mountaineer in his youth. After graduating from the Philadelphia College of Textiles and Science, he did […]

By NICK PERRY – Associated Press WELLINGTON, New Zealand (AP) — New Zealand marked the death of Queen Elizabeth II on Monday with a public holiday, a minute’s silence and an official memorial service. The South Pacific nation is one of 14 countries outside the UK that continue to recognize the British monarch as their […]